What is the Q Cells BLK-G9's Product Warranty?

The Q Cells BLK-G9 is a solar panel produced by Hanwha Q Cells that uses the new monocrystalline panel technology called Q.ANTUM Duo Z. The solar panels feature a power output between 335 and 385 W and come with up to 20.6% module efficiency.

Nowadays, growing numbers of people are turning to solar panels as a cleaner, more sustainable, and more budget-friendly energy source.

If you were in this camp, you might’ve heard about the Q Cells brand and how Bloomberg New Energy Finance ranks them as a Tier 1 solar manufacturer, meaning that banks and other financial organisations trust their solar panels.

However, before you go and buy the BLK-G9 Solar Panel outright, it’s worth understanding its functionality to see if it’s truly the right source of power for you.

To aid in that endeavour, we’ll examine what the Q Cells BLK-G9 solar panel’s features and technical specifications, as well as its pricing and warranty period.

The Q Cells BLK-G9 is a robust solar module engineered in Germany with power output ranging between 335 to 350 W. Using a monocrystalline panel array, which Q Cells refers to as Q.ANTUM Duo Z technology, the BLK-G9 solar modules have a zero-gap cell layout that improves module efficiency by up to 20.6%.

Incorporating this new design in solar cells involves cutting monocrystalline PERC cells in half with twelve microbus bars and arranging them into a novel high-density panel configuration. Including this feature in a panel removes vertical gaps in between solar cells. As a result, the module’s surface area increases, leading to higher efficiency and performance.

If you choose to install any of the BLK-G9 solar modules on your space, you can transform up to 20.6% of your sunlight into power, which brings the efficiency of its solar cells on par with other famous systems.

So you can buy the BLK G9 in four power classes:

Here’s a brief glance at the BLK-G9 solar panels’ technical specifications, side by side with the BLK ML-G9. 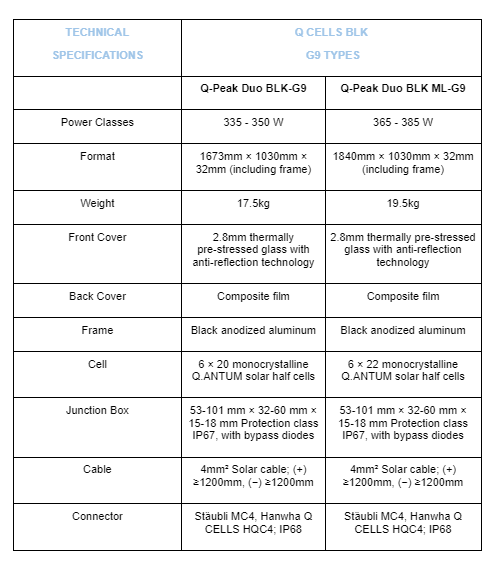 A survey of the performance of each power class may help you decide further between the two types. More information is available in the datasheet below:

What is the Q Cells BLK-G9 Solar Panel’s Power Output?

The power output of the BLK-G9 solar panels ranges from 335 W to 350 W, making it ideal for both residential and small commercial properties.

What is the Q Cells BLK-G9 Solar Panel’s Efficiency?

The BLK Duo G9 solar panels have an efficiency rating of 20.6%, making them some of the market’s most efficient and competitive solar panels. For reference, a solar module with an efficiency of over 19% is regarded to be exceptionally effective in converting sunlight to energy, making the Q Cells a brand leader in the industry today.

What is the Q Cells BLK-G9’s Temperature Coefficient? Will it Perform Well in Australian Weather?

The temperature coefficient of a solar module shows how effectively it will perform in suboptimal conditions.

Because the BLK-G9 modules have an all-black appearance, the surface of these modules heats up quicker upon installation than the air surrounding them, particularly when exposed to direct sunlight for optimum performance.

In addition, the BLK G9 panels include a 32 mm frame built to withstand wind and snow loads of up to 4,000/6,000 Pa, respectively, making these products perfect for adverse weather situations, even in Australia. With its high emphasis on safety, homeowners don’t have to worry about setting BLK-G9 systems on their roofs.

What is the Q Cells BLK-G9 Solar Panels’ Country of Origin?

Q Cells was developed in 1999 in Germany. But in 2012, a South Korean conglomerate called the Hanwha Group acquired it. Hanwha Q Cells has been the official name of the company since then. The firm now has its headquarters in South Korea, with the brand operating as a subsidiary of Hanwha Solutions.

The BLK-G9 panels are engineered in Germany, but Q cells has production plants in South Korea, China, Malaysia, and the United States. Its primary manufacturing plant, however, remains in Talheim, Germany.

Will the Q Cells BLK-G9 Solar Panel Look Good on My Home?

The BLK-G9 series is constructed from high-quality materials that are not only intended for efficiency but also aesthetic value.

The BLK-G9 modules have a completely black appearance that will look great on your roof. Plus, with a highly recommended system for residential properties, homeowners can enjoy quality panels and a reliable source of electricity.

Aside from the solar power that the BLK-G9 systems generate, Q Cells have also developed other quality features that benefit customers. These include:

What is the Q Cells BLK-G9’s Product Warranty?

Having a BLK-G9 system installed is a good investment as the panels come with an inclusive 12-year product warranty.

The product warranty promises that for 12 years, the BLK-G9 will be free from defects in materials and workmanship that could negatively affect solar energy output.

Yes, the BLK-G9 is a Tier 1 panel. The company has been making solar panels for more than two decades. They are well-known specialists in the solar sector for the quality of their products and service.

Yes, the BLK-G9 is CEC-certified and has been thoroughly tested and authorised by the government for installation across Australia.

As far as reliability is concerned, the BLK-G9 solar panel is a top choice. The module can shrug off high snow loads up to 6,000 Pa and wind loads up to 4,000 Pa.

The BLK-G9 series promotes safety and reliability by:

The advantages of using BLK-G9 panels include:

On the other hand, the only disadvantage of the BLK-G9 panels is that the manufacturers strongly recommended them for residential to small commercial properties only.

The BLK-G9 module is relatively simple to install as it follows the same procedure as other solar modules. Installation may take three days at most. To install these panels safely, get in touch with a qualified solar installer like Instyle Solar.

The BLK-G9 system works best in tandem with Enphase Microinverters.

In terms of functionality, durability, and performance, the Q Cells BLK-G9 solar panels are outstanding. They have a maximum power rating of 350 W, making them an excellent choice for use as a solar power source in your home.

Interested in solar? By clicking below, you can use our smart solar calculator to find out just how much you could save with solar, what rebate you are eligible for, and your impact on the environment.

Join over 20,000 homeowners who have made the switch with Instyle Solar or the 1,000+ positive reviewers who have been more than happy with their solar install.