AC vs DC: The difference between alternating & direct current

We often hear the terms AC (alternating current) and DC (direct current) when talking about solar panels and inverters, however not everyone can explain the difference between AC and DC and why it’s important to know it in the first place. 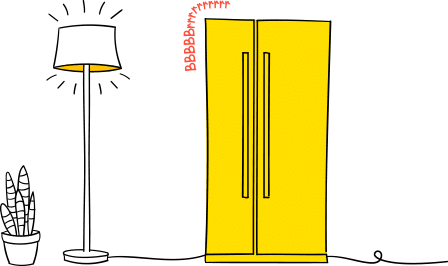 An alternating current (AC) is an electrical current that alternates its direction within a circuit over time. Your home runs on AC. In brief, we use alternating current in our homes because it travels best over a long distance (i.e., from the power station) and is easy to transform from high voltage to lower voltage.

AC voltage has the alternating shape of a sine wave that changes its value (amplitude) periodically across time.

AC power is produced by a special generator called an alternator that converts mechanical energy to electrical energy in the form of alternating current. These devices have a rotor (inside metal axis composed of copper coils) that is connected to a spinning turbine (such as wind turbine, steam or water) to generate a changing electromagnetic field that induces the current in the output of the machine. As the rotor spins around its axis in 360 mechanical degrees, the electromagnetic field varies and the output voltage changes as well in 360 electrical degrees. This provides the alternating and sinusoidal shape of AC (sine wave).

A direct current (DC) is an electrical current that flows in one direction and has a stable voltage across a circuit. Examples of devices that use DC current would be a battery operated torch or your car. Your solar panels are also DC. However, as mentioned above, our homes use Alternating Current (AC). So, to use DC power in the home, it must pass through a device called an inverter to change the power from DC to AC. DC voltage does not change across time, instead, it has a constant value.

The main difference between DC and AC lies in the alternating shape of the AC signal.

Watch this video for further explanation about the differences between AC and DC current/voltage.

The War of Currents

Back in the 19th century, Thomas Edison (owner of Edison Electric) and Nikola Tesla (sponsored by Westinghouse) were at war to establish the type of current that would rule the world. Edison was the promoter of DC (Direct Current) while Tesla was the advocate of AC (Alternating Current). The decisive battle over the control of the electricity industry was decided by the winner of the largest power plant contract in the world back in 1893, the Niagara Falls Power Project in the United States. Whoever won the contract (Edison Electric or Westinghouse) would dominate the electricity generation business all over the world.

The scene of the battle was the World Fair, hosted that year in Chicago City, whose organisers wanted it to be illuminated with electricity instead of candles. The organisers invited Edison Electric (using DC) and Westinghouse (using AC) to bid on the contract. When the bids were received, Westinghouse asked for a quarter of what Edison Electric demanded to illuminate the fair, and so Westinghouse won the contract to bring light to the event. This event dramatically changed the balance in favour for Westinghouse, who then won the contract to feed the Niagara Falls Power Project with AC power. The power plant fed the entire Western side of the United States and demonstrated that AC power was safe and that it would be the leading electrical current in the years to come.

This is the true reason why AC power feeds your house.

DC power is back in business, thanks to solar panels. Solar modules generate electricity in DC, but the concept and technology are completely different from AC generators. However, as Westinghouse won the war of currents, the world now works in AC, and therefore the DC power generated by the panels needs to be transformed into AC. This is where the centre core of the solar system the inverter, enters the action. This device acts as a DC to AC converter that uses the constant voltage signal generated by the modules to create alternating voltage.

We have explored the history and differences between AC and DC power and what’s most important, now you know everything that comes before the inverter (modules, PV cables, DC combiner boxes, batteries) works in DC, and everything that comes after the inverter works in AC (loads). It is important to mention here that when you decide to clean your solar panels, you must always remember to shut down the system by turning off the DC switch disconnector in the DC combiner box because DC can be as dangerous as AC.