A 10kW solar panel system is best suited for large homes. A 10kW system is also suited to electric car owners or those planning to buy one in the future. 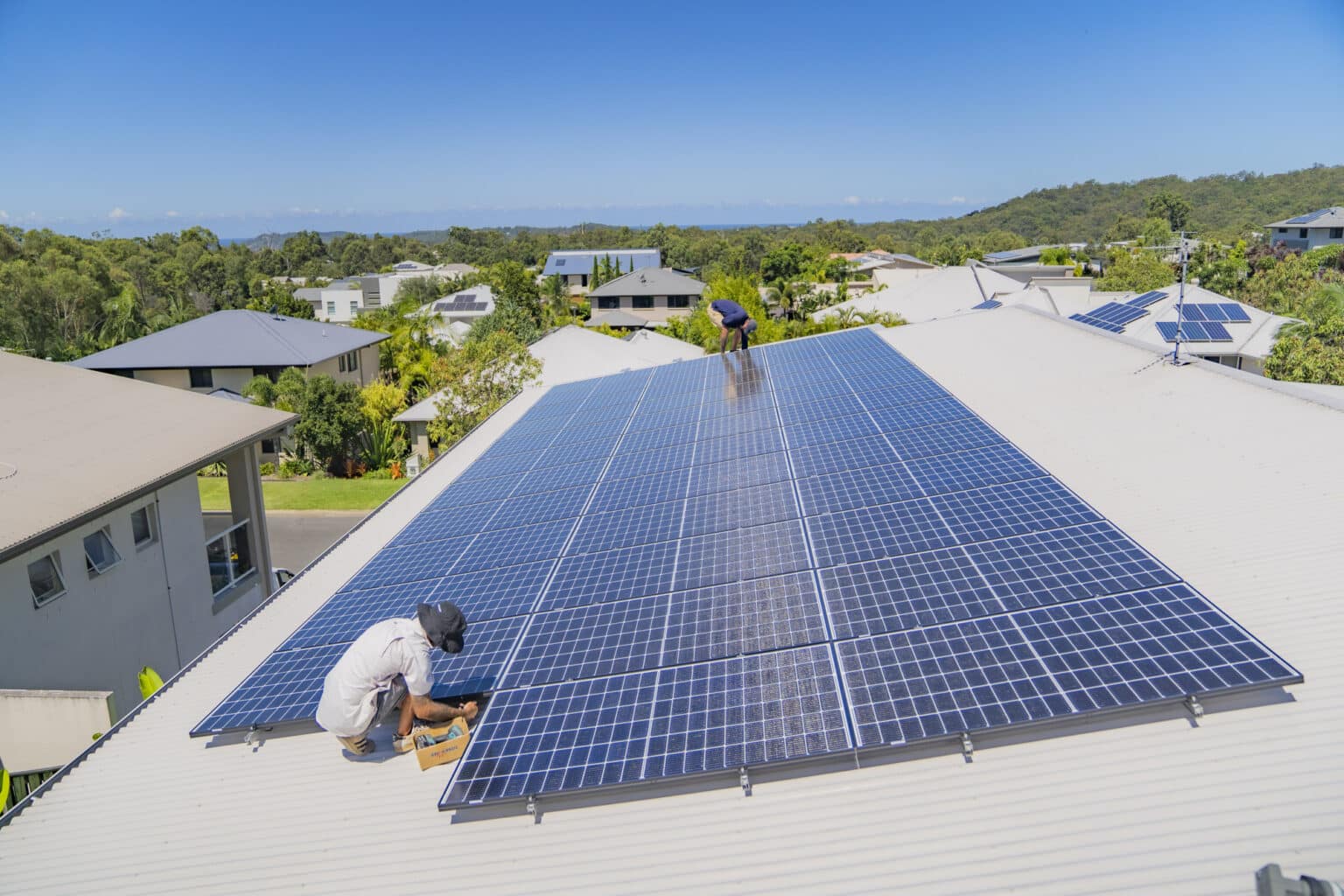 Is a 10kW Solar System Suitable for My Home?

A 10kW solar panel system is best suited for larger homes, or homes with more energy-intense appliances. A 10kW solar energy system is also suited to electric car owners or those planning to buy one in the future. 10kW systems produce up to 42kWh per day, which is more than twice the average energy consumption for Australian households. 10kW systems may require a 3-phase power connection due to their ability to export more than 5kw at a time.

While a 10kW system is more costly than smaller systems, it can produce more power. If you have higher energy requirements, it’s often quicker to pay off the cost of installation by installing a system with a larger capacity.

A 10kW solar power system is also well suited for battery backup systems, as it can produce enough power to fully charge a home battery, and provide the home with power. If you have more than 2 children or live in a household of more than 4 people, a 10kw solar system is likely to cover your needs. If you are planning on staying at your current location, a 10kW solar panel system can future-proof your home from growing energy requirements.

How Many Solar Panels are in a 10kW System?

A 10kW system has between 27 to 33 panels. The number of panels you need largely depends on the quality and efficiency of the solar panels you choose.

The size of a solar system is based on the number of panels used in the installation. For example, to achieve a 10kW solar system you will need one of the following panel count and output combinations:

If you’re using 370 W panels, you’ll only need only 27 panels or modules. However, if you combine this system with a solar battery, you’ll need a 10kW inverter as well with MPP.

Do I Have Enough Roof Space for a 10kW Solar System?

You will need around 45.9m2 of available space on your rooftop. Each solar panel is around 1.7m x 1m, and you will need between 25 – 30 solar panels, depending on their power output.

Average residential installations will generate between 330 – 400 W of power during daylight hours. However, the 10 W system requires a significant amount of energy, so you will need around 25 to 30 solar panels.

How Much Does a 10kW Solar System Cost?

The CEC recommends a 10kW system should cost between $7400 and $14100. The cost of solar panels depends on many factors, including their quality, model type, and more.

It’s important to recognise that financing your solar system is a great way to reduce the upfront cost. As well as this there are many rebates available depending on your state and location that can reduce the cost of solar.

A larger size system can generate more electricity, but it’s fairly expensive. While it may not feel budget-friendly at first, solar power can offer quick returns on your investment and help you build a more sustainable future.

Even if your self-consumption level is low, the extra electricity you generate can be fed into the grid. This will help you with rebates and increase your savings.

The ultimate cost of getting a solar panel system installed will depend on the following factors:

You can contact accredited solar retailers like Instyle Solar for a free quote on how much it would cost to install a 10kW system for your household. If you’re lucky, you might even get a discount on the panels.

How Much Will a 10kW Solar System Save You?

Over their 25-year lifespan, 10kW solar systems can save you over $100,000 when taking inflation into account. This saving is a combination of exporting electricity to the grid and using the power in the home. On a yearly basis, a 10kW solar system will save you $3,220.33 when first installed.

As the demand for solar panels increases, their cost pricing becomes more competitive. In January 2018, the mean solar cost was $3 per watt. Since then, it’s decreased to around $0.91.

Owning a solar battery can help you even further by allowing you prominent daytime usage and excess electricity for when the sun goes down.

What is the Payback Period for a 10kW Solar System?

Most Australians can expect to make a complete return on 1 kW solar systems in 3.35 years if they consume 50% of the energy they produce.

The payback time is how long it takes to equalise total investment for the system’s installment and electricity bill savings.

In some major cities, 10kW solar systems can deliver around 35 – 44kWh of electricity. This makes 10kW solar systems ideal for people who have electricity bills higher than $1,000 per quarter. This can save you more than $4,000 per annum. Homeowners stand to save up to 22 to 30 cents perkWh.

Below is a table that shows the average payback time for homeowners in each major city to break even on their solar installation cost:

Talk to a solar installer and get a free quote on the price; they offer excellent services to all potential clients.

How Long Will a 10kW Solar System Last?

You can expect 10kW solar systems to last 25 – 30 years if installed correctly. After that, the efficiency of the solar battery starts lowering.

The power degradation rate of a 10kW solar system with battery storage is approximately 0.8% per year.

Do solar panels degrade over time? The panels become inefficient at producing electricity over time, and their solar system output also decreases.

The degradation process can take up to 30 years to take effect on any high-quality solar system.

Known as LetID (Light & Elevated Temperature Degradation), this phenomenon is caused by sunlight.

For premium quality panels, the degradation rate is 0.3% per year. Solar system durability can be enhanced by taking care of individual components.

How Much Power Does a 10kW Solar System Produce?

With a 10kW system, you can expect to produce around 35 – 44kWh of electricity every day.

This production capacity varies with different regions, seasons, and climates. For example, a 10kW system will produce less power in winter compared to the summer. Knowing your seasonal usage can help you understand whether a 10kW system would work for you in colder months.

Below, you can find the 10kW energy production in major cities in Australia:

Will a 10kW Solar System Power Your Home?

A 10kW system can meet the present and future needs of any household with a power bill of around $1,000 per quarter. This is usually sufficient to power a four-person family home that is 185 m2 in area.

A 10kW while larger than most systems, is actually better suited for the modern family. You may later switch to an electric car or convert to an all-electric house as the government creates more initiatives to hit climate objectives in the near future.

Can I Install a Battery with a 10kW Solar System?

Absolutely! You can most certainly add a battery to your 10kW system. Battery storage allows you to use electricity you have stored in low iridescence conditions.

This means you can utilise your system even at night. As a result, you can be independent of grid-supplied power at nighttime.

Solar systems with battery storage also earn their keep during calamities. Having a sustainable source of power production and storage is invaluable during natural disasters like hurricanes, where grid power can take days to recover from.

Contact certified installers right now to have your 10kW solar battery installed! They’ll inform you about the legalities of owning a 10kW solar system with battery storage, including:

Within 10 days of installation, a team of State electrical authorities inspects the energy usage. Before that, the installer must send a certificate to the State Authority.

For meter upgrades, the accredited solar installer will notify the electricity retailer. The retailer will send a distributor to upgrade the electric meter. The entire process takes around three weeks.

After the whole process is complete, the solar system will start working. That’s when your real saving begins!

Should I Consider a Larger or Smaller System?

This depends on your long-term plan for converting to solar.

Larger systems can help power your entire household and car and even export surplus electricity to the grid. However, they are more expensive and thus require a greater initial investment.

A smaller system may not be able to meet your self-consumption needs, but they are usually more affordable and don’t require substantial start-up capital.

However, larger systems have become more popular with users in recent years. This is due to:

If your house has a reverse cycle air conditioning system, home automation, and a quarterly electricity bill of 800$, a 10kW solar system is an excellent choice.

Interested in getting solar for your home? By clicking below you can use our smart solar calculator to find out just how much you could save with solar, what incentives you’re eligible for, and the positive impact you can have on the environment.

Ready to Start Saving with a 10 kW Solar System?

Let’s calculate exactly how much a s 10 kW solar system could save you on your bills! Click now to get started.
Start now